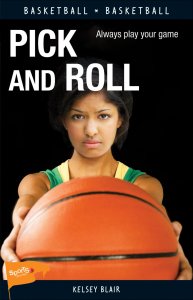 Jazz Smith-Mohapatra is the toughest and best player on her basketball team — and this year she’s determined to lead the team to a championship win. But in the last game of the regular season, Jazz sets an offensive move called a pick and roll. A player on the other team doesn’t see it coming; she crashes into Jazz, and then onto the floor. Though it’s a play that Jazz has done many times, she’s never hurt anyone before.

Now there’s going to be a Fair Play Commission hearing to determine whether the play was legal or not. But even worse than the possibility of being suspended for the playoffs, Jazz’s teammates are suddenly questioning her physical style of play and whether the team can make it all the way to the pennant without her.

“This story, like others in the [Lorimer] Sports Stories series, uses sport as the central theme to tell an engaging, relevant story for young readers…. There are some good lessons about friendship, learning to move on after a setback, and playing on a team.”
– Jaclyn McLean, Resource Links